It’s been almost sixteen years since Pokémon was first introduced to the world. Since its creation, the series has spanned a multitude of media, ranging from video games, to anime, to manga, and even to trading cards. This is largely due to its initial success as a video game when Pokémon Red and Green were released on the original Game Boy back in 1996. Now, it’s 2012, and the series is about to see its twentieth and twenty-first main-series games. With so many games released so far, it can be hard deciding which ones are the ones worth playing the most. Here are my top five choices for the best Pokémon games released thus far. 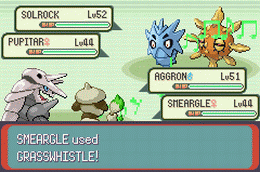 After six years, Pokémon had done what other series’ had failed to do: continue to be relevant. After two generations of games, people were still in love with the role-playing juggernaut. Game Freak was prepared to show fans that it had what it took to not only continue to please them in ways they expected, but in ways they hadn’t thought of as well. Per tradition, a ton of new Pokémon were added to the previous list, bringing the total number of critters up to a staggering count of 386. Game Freak also took advantage of the Game Boy Advance’s hardware and created eye-catching vistas and characters. The developer introduced double battles, which required even more strategy to win. The games also supported Nintendo’s then-new device called the e-Reader, which allowed players to swipe cards and receive in-game bonuses or events. While Pokémon Ruby and Sapphire left behind several features seen in Gold and Silver, the games greatly improved what they did keep, and the new features made them very fun to play.

Pokémon Puzzle Challenge is a perfect example that not all spin-offs have to be bad. In fact, Puzzle Challenge is a legitimately good game. The classic Puzzle League gameplay lends itself well to the colorful Pokémon aesthetic, mixing the best of both worlds to create one addicting package. There is also a plethora of game modes, ranging from Challenge, which sees the player attempting to become the Pokémon Master of the Johto region, to Time Zone, in which the player must get a high score within two minutes. Pokémon Puzzle Challenge is perfect for on-the-go gaming, and you’ll probably find yourself spending a lot of time on it at home, too.

After the tremendous success of Pokémon Red and Blue, Nintendo and Game Freak needed something special if they were going to continue the series’s success. Luckily for them, Pokémon Gold and Silver ended up being the perfect sequels to the first games in the series. Not only did they keep everything that made the games special intact – the aspect of capturing and fighting with imaginative critters, as well as the multiplayer features – they also managed to add many new features that were so well-received, they stayed with the series for every game afterwards. The day/night cycle allowed more exotic creatures to appear at certain hours of the day, while the breeding system let players discover the new baby Pokémon. Additionally, while the game began in a whole new region known as Johto, players were surprised to find that after beating the Elite Four, they could return to Kanto, the region featured in the original games. Pokémon Gold and Silver managed to perfectly balance nostalgia with innovation to create an engaging title in its own right.

Following the remakes of Pokémon Red and Blue, many fans clamored for a remake of Pokémon Gold and Silver. After several years of waiting, that remake was delivered in the form of Pokémon HeartGold and SoulSilver. The remakes not only gave fans another chance to traverse the regions of Johto and Kanto, but also upgraded the experience to make use of all of the series’s advancements since the original games. All of the more recent Pokémon were added, online trading and battling was supported, double battles were implemented, and the graphics and sound were brought up to modern standards. The games even brought in their own additions: touchscreen menus were finally used in full, and a small device known as the Pokéwalker was packaged with the games, allowing gamers to raise their Pokémon outside of the game. All in all, HeartGold and SoulSilver managed to retain the fun of the original Gold and Silver games, while also feeling like a modern-day Pokémon title.

After game upon game in the main series, Pokémon began getting a bit stale. The gameplay, while still fun, was more or less the same no matter which game you played. Game Freak knew that the series needed something to draw old fans back in, to keep the fans it still had, and to get the attention of potential fans. With Pokémon Black and White, they managed to accomplish all three in spectacular fashion. To keep players battling other Trainers, they introduced triple battles, which allowed players to use three Pokémon at the same time, and allowed the game to play like other turn-based role-playing games. The graphics, which were in need of a massive overhaul, were improved, with Pokémon fully animated during battles, while colorful meadows and towns were brought to life in the overworld. The Pokéwalker aspect of HeartGold and SoulSilver was left behind in favor of the Pokémon Dream World, which allowed players to find new Pokémon by way of fun minigames and special offers via their computer. Pokémon Contests evolved into Musicals, in which players dressed their Pokémon up to compete with others. Finally, Black and White introduced 156 new Pokémon – more than any generation before it – that were not only unique, but fun to use. With Pokémon Black and White, Game Freak not only greatly improved previous formulas in the series, but also introduced a large amount of new features, easily making them the most feature-packed and fun games in the series.

Do you agree with my choices? Is there anything you think isn’t true? Head to the comments section below to discuss your thoughts.

by Rhys on February 13, 2014
Classic portable games are coming to Nintendo's not-so-portable console this April.
comments
Leave a reply