by Will on October 5, 2011
Info Center
Item Reviewed

Football (soccer to those of you in the US) is one of the most popular and well known sports in the world. Now EA Sports has released its new version of the ever popular football game, FIFA 12. FIFA has always been popular and a longtime rival of Pro Evolution Soccer, commonly known as PES. At times, it is like these two games represent a big team, fighting it out every year to be the best, almost like the Champions League Final.

FIFA 12 is a football game developed by EA Canada and it is the 19th game in the FIFA series. The main changes in this year’s iteration could be seen as a type of gameplay trio: Impact Engine, Precise Dribbling and Tactical Defending and the new types/aspects of gameplay including other tweaks, but I shall comment on them later. 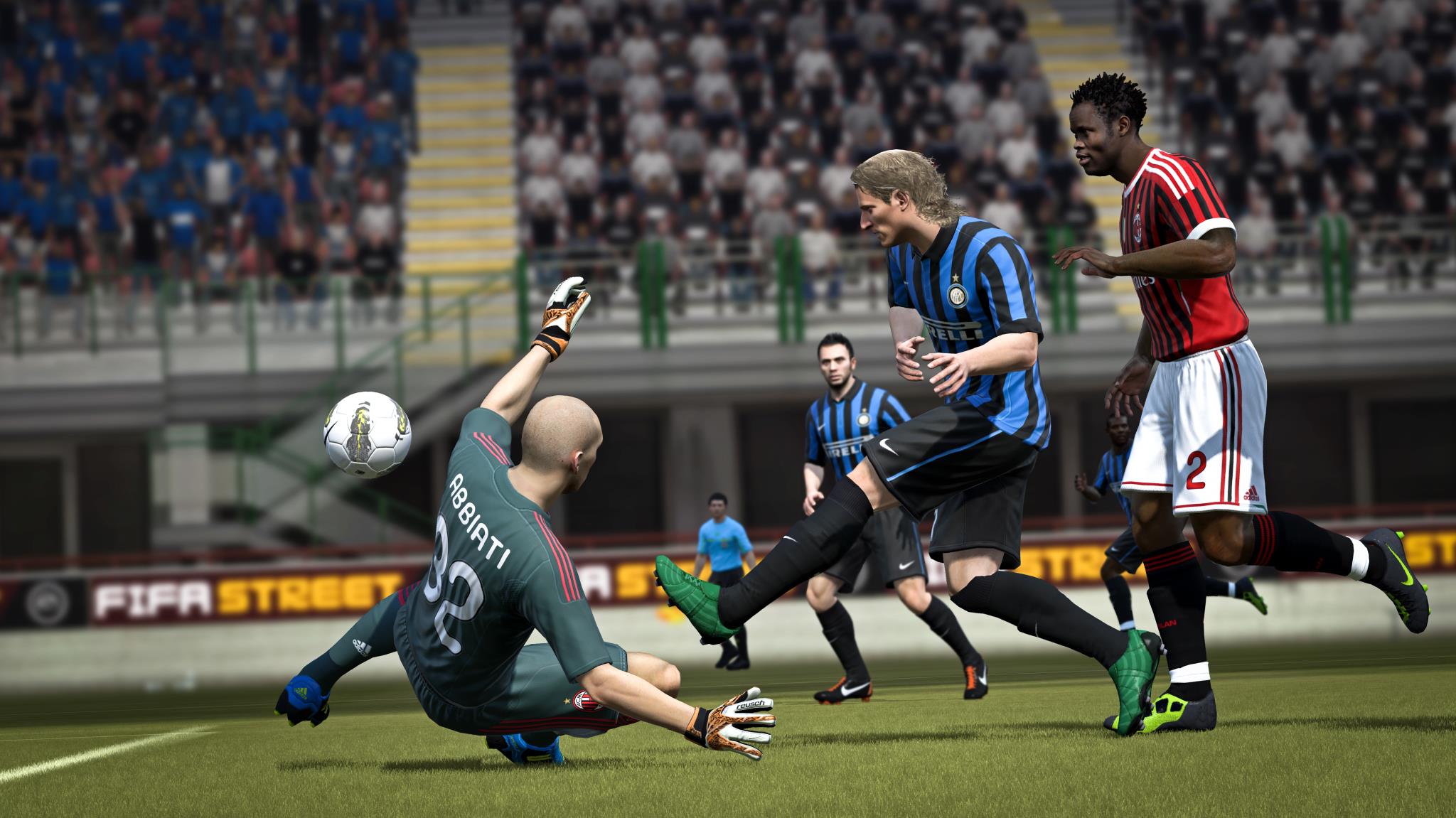 The Impact Engine is something that the developers at EA Canada have been working on for over two years and they are very proud of it. They claim that the Impact Engine allows for seemingly real collisions to take place on the field: no matter where a player is tackled or hit or challenged, they will react accordingly. This certainly all sounds impressive, but the amount of possible interactions players can have and the types of tackles make it hard to see if this engine will function as they explain it will.

When I first played the demo of FIFA 12, I saw that, for the most part, the Impact Engine did what they said it would; but, at times, it was horribly out and strange. Sometimes players who were bumped into would go flying a couple of meters from the incident and spinning wildly. Granted, an engine with this many calculations and outcomes will have bugs and glitches, that is just how it is, but this was a worry for me when I played the demo.

When I got my hands on the real game, however, I was won over. I have played it for over 12 hours in the career mode and I haven’t had one ‘bug’ or ‘glitch’ impact response that I would define as over the top. As the developers said it would, it really does add a different feel to the game, even if you are just watching someone play. If you really go for it and slide into your opponent’s player and catch them, they will react. In some cases, you see spectacular collisions that you would expect to see on the pitch. Some can be a little exaggerated at times, but others would argue, ‘Hey, that is football.’

Precise Dribbling is something that some people might not even take much notice of, but it can be a game changer. To activate this gameplay aspect, you just need to hold one button down – on the PS3 version, it is the R button. This makes the player keep the ball very close to his feet but at the expense of hardly traveling on the pitch. Precise Dribbling isn’t something you can always have on, because it would take you the match to get from one side of the field to the other – rather, it is meant for controlling the ball from a long or short pass, if you have been sprinting and want to change direction smartly and effectively, or if you just want to quickly weigh up your options and don’t want to instantly get tackled for having the ball a meter in front of you. This feature adds a new level of skill to the game, as you can really pull of some amazing ball skills when you are using it.

An example of Precise Dribbling coming in handy was when I had Nani send a long through ball to Rooney, who was running up field, I used the Precise Dribble button to bring the ball down cleanly and then execute a stunning skill move to take it around the keeper and score a goal. Without the Precise Dribble function, Rooney would have most likely chested the ball and completely slowed down the attack, as it would take time for him to get it to his feet and carry on running. Mastering Precise Dribbling isn’t mandatory, but good players will use it to their full advantage.

The final part of the trio, and arguably the biggest change in the gameplay structure, is the Tactical Defending system. In previous FIFA games, the average player would normally just send their players towards the oncoming ball carrier like tomahawk missiles and intercept them that way. However, this is no longer the case; you can still do it, but it is highly unlikely that you will collect the ball and you will just end up leaving a massive gap in your defensive line. EA Canada has worked hard this year to get the player to think about the decisions they are making defensively, in order to get the game to feel more realistic. The idea of the new defensive system is to shepherd the opponents into a corner and to cut them off from the team and force them into a mistake, which is obviously realistic of the game. 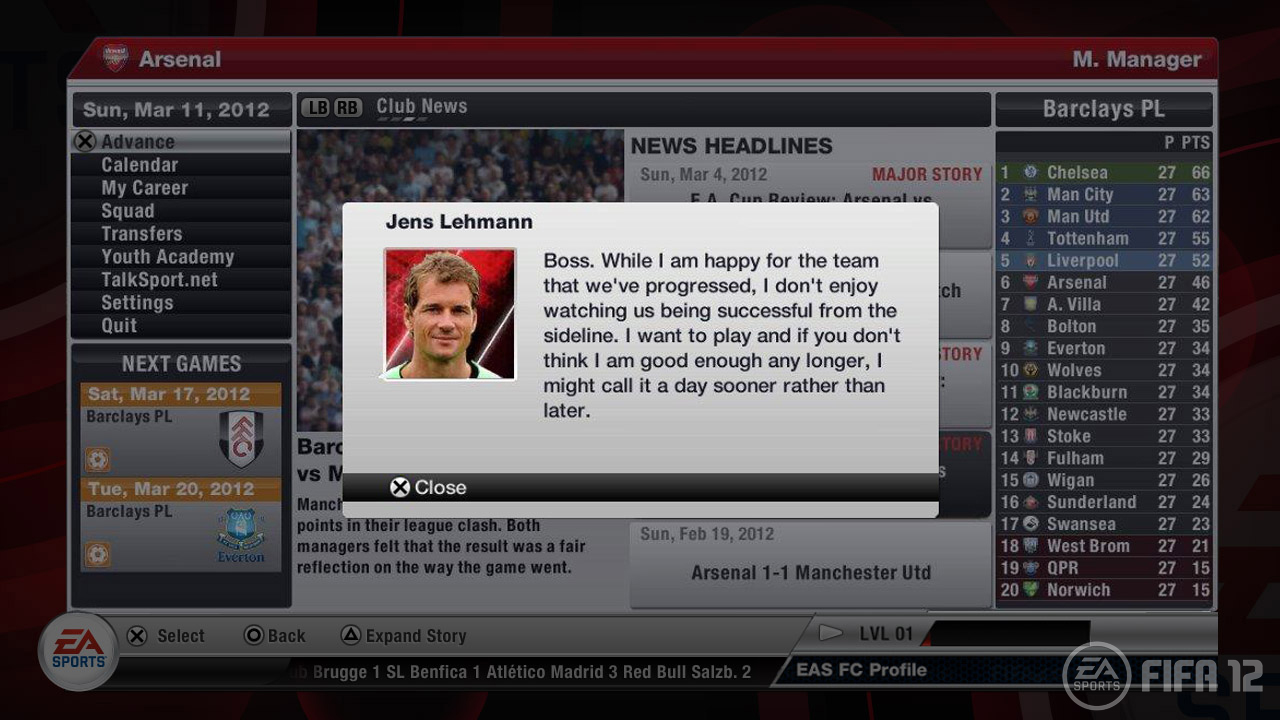 Besides this trio of gameplay changes, FIFA 12 sports improvements in the career mode as well as new commentary teams (including two separate teams of commentary from Martin Tyler, Alan Smith, Clive Tyldesley and Andy Downsend). Players can customize the commentators, depending on which they prefer for the matches. There is also something called ‘Pro Player Intelligence’ which is basically vastly improved Artificial Intelligence. This means that players with better vision stats will be able to see passes and possible moves that other plays won’t – adding yet another element of realism. Old FIFA players will notice the change in the AI straight away, since you can see them passing short on one flank, they quickly switching.

Another realistic aspect that has been added is something called true injuries. This simply means that if you overexert players, they will get tweaks in the hamstrings or calves and so on. Now, you can’t just leave one team on for the whole match, as you run the risk of having half your team getting injured due to their exhaustion and not being fit.

Career mode has had a face lift in the new FIFA, looking and feeling a lot crisper. Not only do you have local news, but transfer and world news which allows you to keep on top of everything important happening. Little additions like having the week progression on the same screen, instead of switching to a massive calendar, are nice touches. Deadline day has now gotten more interesting, actually having the career hub change to be all about transfers on the last day and showing how much money you have left. It really puts you in the shoes of what it could be like to be going through this exciting but nervous time. You also have more detailed statistics on your team and how they are feeling. They will ask for more playing time if they feel they aren’t getting enough and they will kick up a fuss, so it is tough to keep everyone happy.

Another new aspect is the live season, where you pick your favourite team at the start of the game. Every time you play FIFA and unlock achievements or do certain things in the game, you get experience points to go towards the chosen team’s overall total. This adds to your selected team and, depending on the contribution of everyone on the game, that decides the place of the team in a weekly league. However, just because one club has more supporters, doesn’t guarantee them to be top all the time. The amount of people that ‘support’ the club and how many points they earn for that club is boiled down to an average points earned, so it is very fair.

Graphically, there is a big difference with this year’s iteration of FIFA. The graphics in game when playing are very smooth and crisp, players looking more like they should and with the impact engine, it just feels that little bit more real. One aspect of the FIFA series that has always been a weak point is the crowd. They look better in FIFA 12, but when you see replays of close up shots with the crowd, they just look so pixelated and only have about 3 different actions. Granted, you won’t be looking at the crowd all that much, but I like to see work that goes into even the smallest areas. The menu screens have had a make-over this year and the biggest difference is the Career mode menu that I mentioned earlier. Although it can look daunting at first, you will grow to wonder how you coped without that layout, because it holds all the information that you would need to be a successful manager/pro. 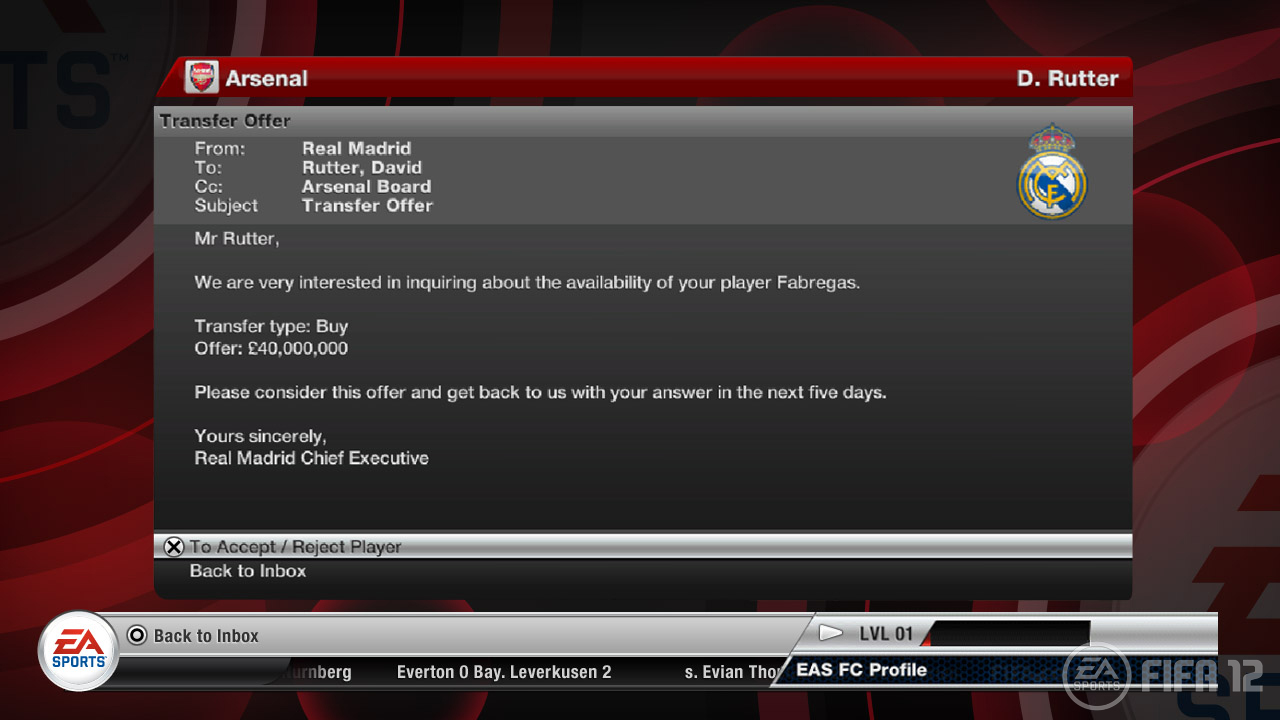 The sound in the game has improved vastly, especially when playing an actual game. Depending if you are home or away, chants and boos are normally dominated by the home team. One nice touch I noticed was if you are playing away and in another country, if you score a goal, there isn’t much cheering because your fans are vastly outnumbered. As I said before, you have the choice between four commentators now, which can combat the urge to mute your game a few months down the line after you have heard everything they have to say hundreds of times over.  The sound effects deliver the same sounds you would expect to hear in a real football game. As standard in the FIFA games, you can decide which songs play outside of the game part and turn them off and on – though the option to import your own music would be a nice addition.

FIFA 12 lasts as long as you want it to, through many seasons of football as a player, manager or player-manager. You also have the online/local multiplayer aspect and then the ultimate team online mode, which keeps a lot of people entertained for a long time. If you’re a fan of FIFA, the game will spend plenty of time in your console.

Overall, FIFA 12 is the perfect game for anyone who is remotely interested in football, ranging from casual to hardcore fans. It’s extremely fun and offers the most realistic football experience yet. There’s a great amount of content and once you get hooked, you’ll spend hours on end with the game. FIFA 12 gets a solid recommendation, especially for fans of football and sports games.

FIFA 12 offers the most realistic football (soccer) experience yet, with excellent new gameplay tweaks and an outstanding presentation.

by Geoff on February 16, 2016
Battlefront delivers a fantastic Star Wars spectacle but disappoints as a game, with fairly significant balance and matchmaking issues as well as a lack of content.

by Rhys on February 1, 2015
The Resident Evil remake has aged incredibly well, proving that when done right, survival horror games can still have a place in the modern gaming landscape.

by Rhys on August 13, 2012
Classic platforming, fast-paced combat, and a good story make Dust a tale worth experiencing.
Comments
Leave a reply